BREAKING NEWS: Barcelona banned from making transfers in the next two windows (sourced from Sky Sports) 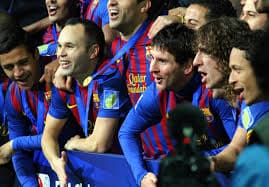 Barcelona have been banned from transferring players in the next two windows by FIFA.

The Spanish giants are deemed to have breached rules relating to the “international transfers of non-Spanish minors”, according to a statement from the game’s governing body, and they have also been fined along with the Spanish FA (RFEF).

Following investigations by both the FIFA Transfer Matching System and the Disciplinary Committee, Barcelona and the RFEF have both been found to have violated several provisions of the Regulations on the Status and Transfer of Players, as well as other regulations regarding the registration and participation of certain players in national competitions.

The FIFA statement added: “The disciplinary committee emphasised that the protection of minors in the context of international transfers is an important social and legal issue that concerns all stakeholders in football.

“The committee highlighted that while international transfers might, in specific cases, be favourable to a young player’s sporting career, they are very likely to be contrary to the best interests of the player as a minor.

Barcelona have been given a year-long transfer ban by FIFA after breaching the rules on transfers of players under 18.

“Young football players are vulnerable to exploitation and abuse in a foreign country without the proper controls. This particular fact makes the protection of minors in football by the sport’s governing bodies, especially by FIFA, even more important.”

The Spanish FA, which violated article 19 of the regulations regarding the first registration of the players, has been given a period of one year in to regularise their regulatory framework and existing system concerning the international transfer of minors in football”.

Barcelona will almost certainly appeal against the transfer ban, which has cast a shadow of doubt over moves already agreed for Borussia Monchengladbach keeper Marc-Andre ter Stegen and Croatian 17-year-old Alen Halilovic, who turns 18 in June.

Barcelona have a trio of youth players from South Korea, including much-sought after 15-year-old striker Lee Seung Woo, plus other players from Africa. FIFA only allows international youth transfers when one of three situations apply: the player’s parents have moved country for their own, non-related reasons; the move takes place within the European Union if a player is aged between 16 and 18; or the player’s home is less than 50 kilometres from the national border being crossed.

Sky Sports Spanish football expert, Guillem Balague, said: “The immediate reaction is shock, but at same time there have been so many cases not investigated for so many years, not just at Barcelona but at other clubs too.

“Barcelona say they are calm and they believe they have an explanation as to why and how these players have been signed.  I very much doubt Barcelona would do that illegally and they must have some explanation.”