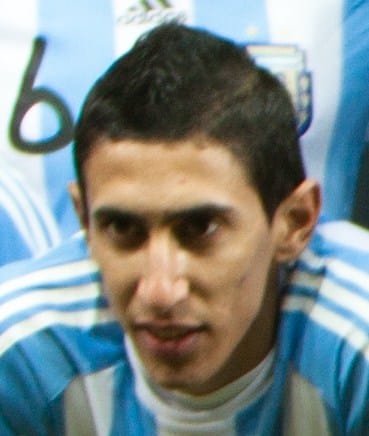 There is finally some significant movement in the seemingly never ending, ‘Will he stay or will he go’ saga of Angel di Maria. It now looks certain that he will leave Real Madrid and become a Manchester United player. The final meetings will take place at the beginning of next week.

United will pay £63.9 million for the player who shone at Real Madrid last season leading them to the Champions League final.

“So advanced, in fact, are the negotiations that it has already been agreed that Di Maria will wear the number seven shirt, worn in the past by no lesser players than David Beckham, Eric Cantona, Cristiano Ronaldo, George Best and Bryan Robson.”

The talks between the two clubs are so advanced it has been suggested that Di Maria will wear the number seven shirt, worn in the past by no lesser players than David Beckham, Eric Cantona, Cristiano Ronaldo, George Best and Bryan Robson.

As soon as Di Maria knew of Manchester United’s interest he was very excited about the possibility of coming to Old Trafford, however pretty upset the way Real Madrid had treated the Argentina star.

At first Paris Saint-Germain showed interest in singing him and said they were prepared to meet his wage demands of 8m Euros a year net but the deal offered by United was much more interesting to him.

Firstly, United is a club with much more prestige throughout Europe, and secondly, it’s a new project where he knows he will be one of the leaders. Cristiano Ronaldo has also told him some great things about United and has succeeded in persuading him that it is a good option even though the club is not playing in Europe this season.

He is also very excited about the prospect of working with manager Louis van Gaal and everyone is expecting that the deal will be closed soon.

There is agreement between the club and the player and it is expected that the announcement will soon be made official because the positions of the two clubs are thought to be very close. United accept the valuation of the player above the 60m mark (Real paid 36 million to Benfica in 2010). The final cost of his transfer will depend on variables.

There is absolutely no chance of Di Maria staying at Real Madrid, because despite just about everyone from all the players to the technical staff rating him very highly, Real Madrid have decided, primarily via their president Florentino Perez, that Di Maria cannot carry on at the club.

It is also thought that as soon as Di Maria confirms that he will become a United player he will write a farewell letter to the Madrid fans explaining the reasons for his departure.

He is very excited by the prospect and he is just the sort of player that Van Gaal is looking for.