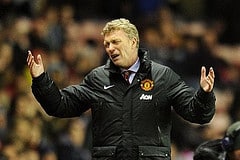 Manchester United manager David Moyes is amongst the nominees for Barclays Premier League manager of the month for December.

It’s not a joke. Moyes’ men have endured a poor start to 2014 – but they secured four wins and a draw in December which has seen him shortlisted.

Also in contention is Chelsea boss Jose Mourinho, who had a win ratio of 71 per cent after claiming five wins from seven games, losing just once. Manchester City boss Manuel Pellegrini is also up for the honour after going unbeaten in the month, winning six of his seven games. The final name up for the award is Everton’s Roberto Martinez, who lost just once in his six games – taking his side to four wins over the festive period. Whoever wins will be taking their first honour of the season, as the previous four winners – Brendan Rodgers, Arsene Wenger, Mauricio Pochettino and Alan Pardew – are not nominated.

Like with the manager award, the player of the month will also be a new contender as none of the previous four winners are up for nomination. Liverpool’s Luis Suarez leads the contenders, but Manchester City stars Alvaro Negredo, Vincent Kompany and Yaya Toure are also in contention. England and Everton starlet Ross Barkley is nominated along with Arsenal’s Theo Walcott, who has subsequently been ruled out for the season.